Adam Cole recently made his debut at NXT TakeOver: Brooklyn III flanked by Bobby Fish and Kyle O’Reilly.  He made his intentions clear by laying a beat down on newly crowned champion, Drew McIntyre.  I recently wrote about Cole’s connection with O’Reilly for the PWSA.  I wasn’t always a fan of Cole though.  His first run in Ring of Honor was kind of bland following that match with his ex-Future Shock partner.  Don’t get me wrong it was decent, but he was just a standard babyface.  They gave him the ROH TV title, but nothing about that reign really stood out.  It wasn’t until the summer of 2012 when he posted a promo about being in Pro Wrestling Guerrilla’s prestigious Battle of Los Angeles tournament that I started to change my mind.  I was moderately aware that Cole wrestled heel in Combat Zone Wrestling earlier in his career, but this was the first time I saw the smug, arrogant prick that he’s so good at portraying.

Cole had been wrestling in PWG since the end of 2011, but never as a singles competitor.  He was always in tag-team matches with his Future Shock partner, Kyle O’Reilly.  This tournament would be the first time he wrestled solo in front of a PWG crowd and they can be notoriously smarky.  His first round opponent, El Generico, wasn’t going to make things any easier for him either.

The match is a great showcase of how different Cole is as a heel.  He’s not above breaking the rules and he’s incredibly cocky.  He jumps Generico while he’s being introduced and any time that he goes for his standard offense, Cole is able to shut him down.  This is how Cole ultimately wins the match. When Generico goes into his finishing sequence Cole is able catch him in a small package and kept him down for the three-count.

After what many would consider an upset against the generic luchador Cole advanced to Night 2 of the tournament to take on a former tag partner, Eddie Edwards.  This one starts off with Cole getting in some stretches before locking up with Eddie.  Cole even gets the crowd to clap “We Will Rock You” before changing it to “Suck My Dick”.  Cole absorbs a decent amount of punishment in the match before he’s able to hit one of his finishers, Florida Key (it’s a German-Suplex where the opponent’s arms are crossed). 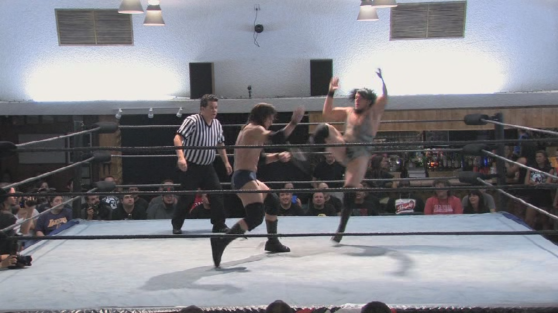 Cole’s next opponent would be someone he had a lengthy and bitter rivalry with in Combat Zone Wrestling, Sami Callihan.  The match starts with the two of them yelling insults at each other before Sami charges Cole and starts kicking the hell out of him in the corner.  Cole takes more punishment from Sami’s lightning quick, high impact offense.  Eventually Sami makes a mistake and Cole works on Sami’s leg for a bit before locking in a figure-four leglock.  It’s too much for Sami and he taps out. 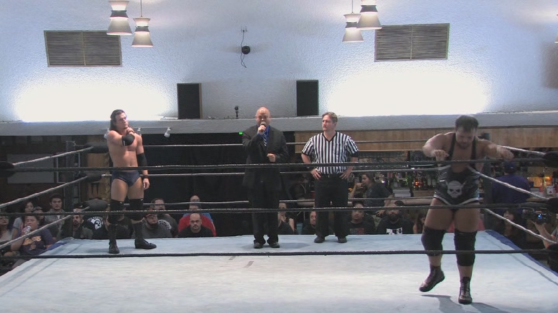 For Cole’s last opponent he would have to break the unbreakable by going head to head with Michael Elgin.  Cole doesn’t seem to be as cocky as the contest starts since he knows Elgin won’t be an easy win.  The match quickly makes its way outside and they fight through the crowd.  Both men use every move that brought them to the final, but Cole is able to get the win by hitting a Destroyer, a pair of superkicks, and Florida Key in rapid succession.

After being presented with the trophy Cole calls out PWG champion, Kevin Steen.  Cole eventually kicks Steen low and clocks him with the PWG belt.  He takes his trophy and Steen’s belt and leaves.  This would set up the main event of the las PWG show 2012, Mystery Vortex. 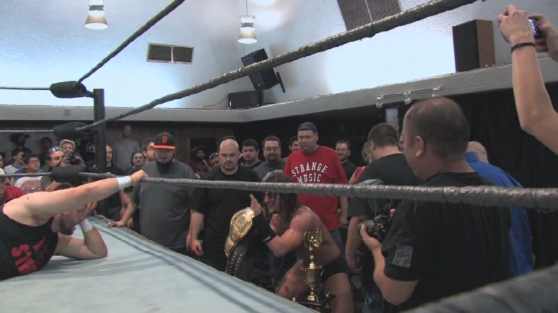 Steen and Cole would collide in a Guerrilla Warfare match, which means that there are no rules.  Both men made creative use of the stipulation.  Once Cole hits the ring he tries to lay out Steen again with the championship belt.  Steen avoids it and mauls Cole at ringside and crotches him on all four corners of the ring.  He follows this up by powerbombing Cole on all four sides of the ring apron.  Amazingly Cole would battle back from this onslaught.  Trash cans, ladders, chairs, and thumbtacks would all be introduced.  Somehow Cole would withstand Steen’s onslaught and win the PWG title.

Mystery Vortex: Adam Cole Vs Kevin Steen (I’m not sure how anyone survived this either)

With Cole capturing the PWG championship he would start a reign of terror that lasted over a year.  He turned away challenges from Sami Callihan, Drake Younger, Kevin Steen, Johnny Gargano, and many others.  He would eventually start a faction with The Young Bucks and, surprisingly, Kevin Steen.  They would refer to themselves as the Mount Rushmore of Wrestling.  Cole would eventually be dethroned by his shadow, Kyle O’Reilly.

He’s Been Through A Lot

I personally love this run a lot.  The matches are generally really good and you want to see someone eventually dethrone Cole the longer the title reign lasted.  It’s not that it was boring; it’s just that he was a little shit.  The crowd was always excited to see him, but they also hated his actions which is a tough thing for modern day heels to do.  They’re either boring (see Corbin, Baron) or they pander to the crowd too much and they may as well be faces at that point (see Owens, Kevin).  This run went a long way in cementing his credibility with fans  It also helped start a heel run in Ring of Honor that led to him being the only person to win ROH’s World title on three occasions.  During this time he joined New Japan Pro Wrestling’s Bullet Club.  His NXT debut may not have been much of a surprise, but the way they did it was.  He’s immediately looked at as a major player and there isn’t that awkward face run when indie guys first show up.  He’s way better as a heel and it’ll be fun to see how a new audience reacts to him, bay-bay.

Most wrestling promotions have a person that you associate with it.  WWE has had people like Hulk Hogan, Stone Cold Steven Austin, The Rock, and John Cena.  WCW had Ric Flair and Sting.  Over the years Ring of Honor has had many faces represent them as well.  Low-Ki, Christopher Daniels, Samoa Joe, CM Punk, Bryan Danielson, Nigel McGuiness, Tyler Black, Jay Lethal, Adam Cole all come immediately to mind.  All of these men have left at one time or another or have come back after wrestling for other promotions.  There are only two men that can confidently say they’ve been there since day one and are pretty interesting representatives for Ring of Honor:  Jay and Mark Briscoe.

The two chicken farmers from Sandy Fork, Delaware don’t immediately strike you as the faces you’d want your promotion to have.  They are incredibly rough around the edges and, in the eyes of others, are not cosmetically pleasing.  But they have been a part of ROH since the very first show The Era of Honor Begins that took place on 2/23/02.  Jay was on the card wrestling The Amazing Red and Mark was in his corner.  Mark couldn’t compete because he wasn’t of age, he was only a little over 17 at the time of the event.  The two of them would have a brief rivalry before teaming up in 2003 and winning the first of their 8 tag team championships in ROH.

They would take a few years away from ROH due to an injury that mark suffered in a motorcycle accident.  Dem Boys would come back at the 4th Anniversary show in 2006 and they are still a part of the roster now.  Throughout the years they’ve been used to reset the tag-team division.  By “reset”, I mean that they would become the champs and be the team to beat for a little while and then drop it to an up and coming team.  I think it’s a little different from being a transitional champ since there usually isn’t a “chosen team” that seems destined to win the title.  Their success isn’t just limited to the tag-team division though.

For years a lot of ROH World champs would take the “Jay Briscoe Challenge”.  Jay had quite a few opportunities to win the ROH World title and he would almost always take the champ to their limit, but he always came up short.  This would change when Jay ended Kevin Steen’s epic title run in 2013.  He also dethroned Michael Elgin in 2014 and this made Jay one of only three men to capture the World title on more than one occasion.  Mark hasn’t had any singles gold yet, but I don’t think he seems to mind.

Throughout the years they’ve also been involved in some of the more memorable moments in ROH’s history.  Two memorable moments happened in the same match.  They were a part of very first ladder match in ROH when they defended the titles against Kevin Steen and El Generico.  They were able to turn back the challengers, but the debuting faction The Age of the Fall which consisted of Jimmy Jacobs, Tyler Black, and the Necro Butcher took out Mark.  After Mark was out of the way the hoisted a bloody Jay on the apparatus that held the tag titles and strung him up.  Jimmy Jacobs cut a promo while the blood of Jay Briscoe gave him an unholy baptism.  They’d go to war with The Age of the Fall and eventually lose their titles to them.

I got the chance to see Dem Boys in action in Milwaukee, WI in the summer of 2012.  They had a hell of match with Kevin Steen and Jimmy Jacobs that originally ended in a no contest.  Jim Cornette then came out and made it a No-DQ match and the fight was back on.  Mark and Jimmy Jacobs disappeared for a little while and Steen and Jay brawled in the ring.  A table was eventually brought into the ring and Mark and Jimmy reappeared in the balcony that Turner Hall has.  Mark was able to beat Jimmy down while Jay was able to set Steen on the table.  Now, if you’re a wrestling fan, you pretty much know what comes next and it’s still the craziest thing I’ve seen in person.  Mark jumped from the balcony on to a prone Kevin Steen and drove him through the table.  This was ROH’s first time back in Wisconsin in quite a few years and it seemed they wanted to reward the crowd with something cool.  I still talk about it any time I’m with fellow wrestling nerds because it was that memorable.

They’ve had some matches against each other, but they’ve never split up.  Their promos are memorable and their matches are hard-hitting.  Most importantly both brothers hold your interest.  They are the most decorated tag team in the history of ROH and they’ve been loyal.  They weren’t always the face of the company, but because of their tenure it’s hard to deny that they are now.  If ROH ever has a hall of fame Dem Boys get inducted on Day One.