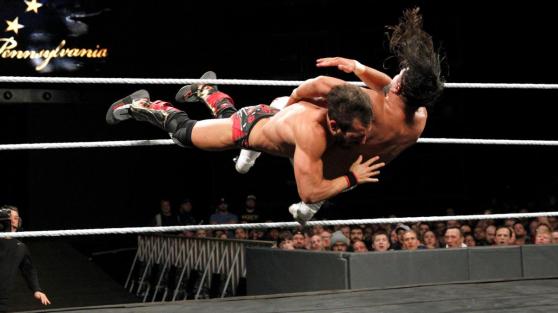 Sometimes it’s the simple things in wrestling that make a match great.  Emotional investment in wrestling is so crucial to a successful match.  You might be invested in one of the competitors because you’ve been following their career for years.  The storyline building up to the match might also hook you and you want to see where things go.  The athleticism or brutality of a match will also keep you interested.  Last night Andrade “Cien” Almas and Johnny Gargano had one of the best main event matches in a WWE ring I’ve ever seen at NXT TakeOver:  Philadelphia because they adhered to keeping things simple.

Just within the framework of NXT the story was a pretty simple one to follow.  Both men had a rough 2017, but for totally different reasons.  Almas started it with a career that seemed to not be going anywhere.  He was well received in NXT, but didn’t take advantage of the opportunities to showcase his abilities.  This all turned around when Zelina Vega became his manager.  He developed more of a focus and with Vega’s help he set his sights on the NXT championship.  Almas would eventually get his opportunity and wrest the title from Drew McIntyre.  Johnny Gargano started his 2017 off as one half of the NXT tag team champions known as DIY with Tommaso Ciampa.  They would drop the titles early in the year to The Authors of Pain.  DIY would challenge for the titles a few more times and come up short.  After losing on their final attempt to recapture the tag team titles, Ciampa violently attacked Gargano effectively ending their partnership.  Ciampa was gone dealing with a knee injury for the rest of the year while Gargano attempted to carve out his own path.  Gargano would face Almas two other times prior to their championship encounter and came up short both times.

So the story for both men going into this match was a pretty simple one.  Almas’ story is that he needed to beat Gargano to show that his championship win wasn’t a fluke and to show doubters that he was a legitimate champion.  Gargano’s story was that could he beat Almas and recapture championship glory without a partner.

Now full disclosure from your author:  I’ve followed Gargano’s career for a while but was never that big of a fan.  I always enjoyed his work, but never fully invested in it.  I also haven’t seen Almas’ work in Mexico as La Sombra.  However, after watching their match last night I can safely say I may be a fan of theirs for life because this match completely hooked me.  The build was incredibly simple and well done.  The ringwork was top-notch with some great technical work from both men.  Their chemistry was off the charts as they strung together counter move after counter move.  I was on the edge of my seat and I bit on damn near every near-fall.  Toward the end when Almas’ assault shifted to slamming Gargano’s head into the ring apron repeatedly I just wanted it to end because he was selling the damage so well.  When the match was finally over, it wasn’t a completely clean victory for Almas since Zelina Vega did interject herself at numerous opportunities.  Even when Gargano’s wife, fellow wrestler Candice LaRae, ran Vega off it still wasn’t enough.  And to make matters worse, Ciampa showed up after the match to pour salt on the wounded Gargano by cracking him in the back with a crutch. 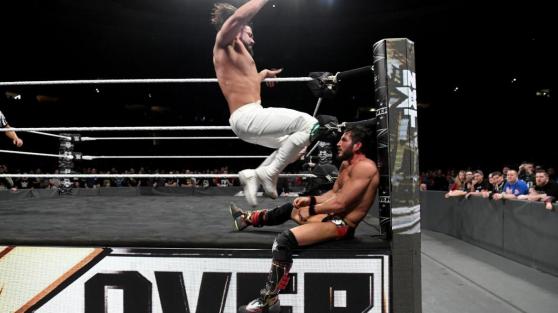 Both men have interesting stories going forward as well.  Gargano has to sort out his business with Ciampa before he can move forward and capture the NXT championship.  Almas has now legitimized his title reign and will look to defend it by any means necessary with the assistance of Zelina Vega.  I could make the statement that’s been made so many times damning WWE for being overproduced and under-delivering on any emotional content, but I won’t (even though I sort of just did).  NXT, and pretty much all wrestling for that matter, excel when they keep things simple (but not stupid).

All images taken from WWE.com